Sometime, somewhere, between Africa and Hindustan, lay a river so Jewish it observed the Sabbath. According to the ninth-century traveller Eldad the Danite, for six days of the week the Sambatyon pushed a heavy load of rocks along its sandy course. On the seventh day, like the Creator of the universe, the river rested.


Having caught my breath, for who could not be breathless at such beauty, I begin to wonder: Is this who we are, every one of us a Sambatyon, a Sysyphean river, or a tribe of one lost on the other side, and at the same time the dividing line between this and that.

Caught in a paradox: on the day on which the river ceases to flow and the rocks are like stepping stones, we may not cross; and on the days we may cross, it rages and threatens to kill anyone who steps into it. 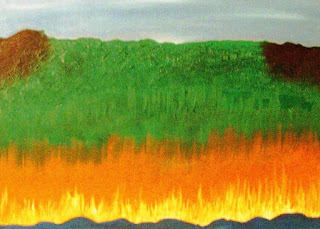 November 07, 2020
A cool day in October, but warm inside the car. Left turn onto Derry, then a right onto Appleby Line. Heading south, down from the Escarpment, the thin road winding past horse farms and other large properties with houses set back, dotting, as they say, the landscape. The leaves are turning. Cross the 407, and the single-family homes are replaced by large parking lots fronting commercial plazas, and mid-rise apartment buildings. Keep going south to Harvester, turn into the Tim Horton’s parking lot. Here. Clutching Tehillim I cross the road and place myself on the sidewalk next to the open gate into the compound that looks like a large manufacturing facility, many low buildings made of concrete with corrugated roofs. No windows. A chimney from which rises white steam or smoke. I can see the 18-Wheeler sitting at the intersection. I open the book. Adonai is my shepherd, I shall lack nothing. In lush pastures He makes me lie, Beside tranquil waters He leads me. Then the vehicle i
Post a comment
Read more

April 19, 2020
I have always loved God for rebuking the angels when, seeing the Egyptians drown in the Sea of Reeds (Talmud, Megillah 10b and Sanhedrin 39b), they burst into song. But the Israelites, newly and safely arrived on the other shore, also sing triumphantly (Shirat Hayam), completely oblivious to the fact that in order to save them and nudge them toward a better life, God has had to sacrifice so many of his other children, and is weeping at their loss. And God is silent. In 5780 the plague is not only killing the Egyptians, it is killing both the Egyptians and the Israelites. And everyone else, too. At the seder we are to experience what our ancestors went through, as though we had actually been there. At this year’s seder I found myself reliving the story of the Israelites, and the story of the Egyptians at the same time. Maybe the latter more so. Mitzraim, the narrow place we must pass through to emerge as free and responsible individuals, is here. Right here. And right now. Do yo
Post a comment
Read more

January 18, 2021
art by Shelley Yampolsky Inside the shells of our solitude edges and contours disappear. What use is skin without an other leaning in. When we are free to love again the deep dark pool of me will flow into the deep dark pool of you like water going home into the sea.
Post a comment
Read more